Today I want to share the evolution of The Tortoise and the Hare illustration with you. After the first version was finished I got feedback from my editor on behalf of the Auzou team about reconsidering the way I illustrated this fable. Aude (my editor) suggested that I bring some movement to this illustration since it’s about a race, a rather famous race. We all know about the hare and the tortoise race because it has been represented extensibly in many cultures. 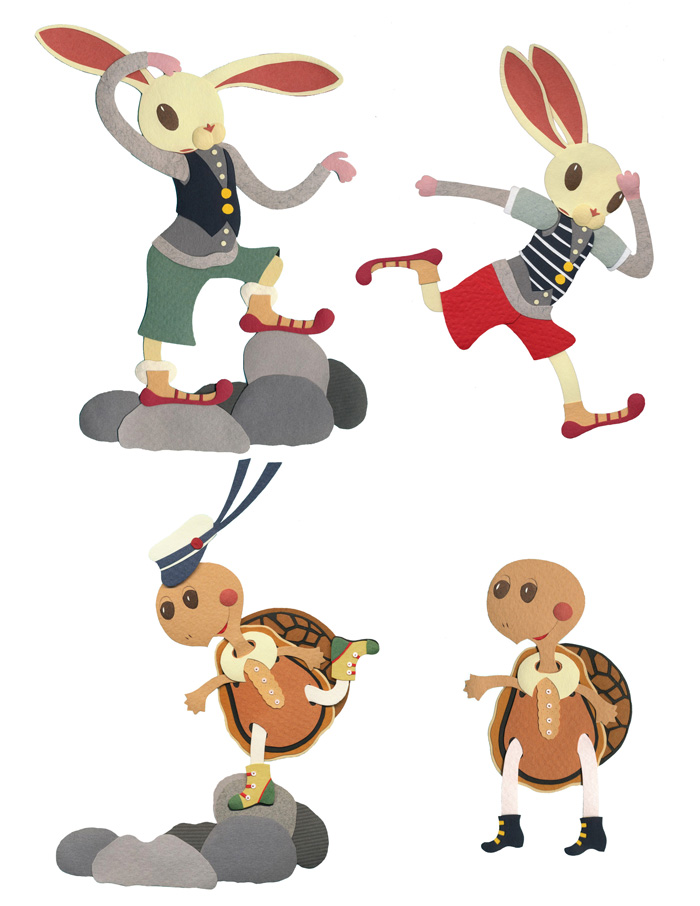 I like the first version a lot, but the more I thought about the idea of movement for this scene the more I liked it. So I went on with the changes. First, I convinced the hare to change his clothes to something more sporty and second, I got the tortoise a pair of colorful shoes. Then I asked both of them to run as fast as they could. The tortoise didn’t start running right away because she came up with this idea of wearing a little sailor hat. I said yes and then things started falling into place.

I also changed some of the stage elements in order to make it less distracting and the rocks became the place where the race ends. As you can see the tortoise touched the rocks first while the hare is still in the air absolutely in shock! He can’t believe that the tortoise got to the rocks first!

The final result is a more fun illustration which brings more character to the book. I like both versions a lot but the 2nd one works a lot better for the book. I think that children are going to like seeing the animals running. Yay!!

Now back to work. I’m taking care of the cover. But I’m not running because we learned from this fable that sloooooowly and steeeeady wins the race 😮

Have a great day!